Many of you may have heard that the UCLA Bruins signed P. Diddy’s son, Justin Combs, to a football scholarship for the 2012-2013 season. Well, the Bruins have continued down the hip-hop road by offering Snoop Dogg’s son Cordell Broadus a full-ride (perhaps trying to spark a friendly inter-squad east coast-west coast rivalry?). There is a chance that the two hip-hop icons’ sons could play on the same team, but 2012-13 will only be Broadus’ sophomore year in high 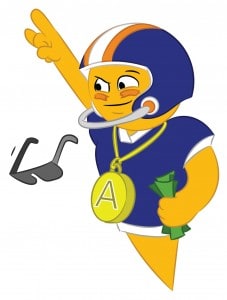 One of the biggest questions is whether these moves were made based on the two young athletes’ skills, or for other means. UCLA is a state school, and California has been making budget cuts to state schools. The move to sign both Combs and Broadus could very easily be a move to bring two very rich boosters to the football program. UCLA is overshadowed in Southern California by its rival USC (Snoop Dogg says he is a big USC fan- so it could be a big steal for UCLA), and bringing in two parents with a combined net worth of over half a billion dollars (not to mention their A-List status) can go a long way in changing the balance of power in Southern California football.

When Combs was signed, many people said since he is Diddy’s son he doesn’t deserve a scholarship because of his father’s net worth (around $500 million); however, athletic scholarships are not given out based on financial need. Athletic scholarships are paid for by revenue from athletics, such as ticket sales and TV rights/media contracts. They are also supplemented by boosters and private donors. Football at the NCAA Division I level is a head-count sport, meaning all scholarships are full-ride scholarships, so there is no way that UCLA can offer Broadus or Combs anything less than the full scholarship- currently valued at $54,000.

So What Does All This Mean for the Average High School Athlete out There Getting Recruited?

Football recruiting is extremely competitive. There is an important lesson to remember from these two recruiting stories: you are not Snoop Dogg or P. Diddy’s kid. That means that you don’t have resources and the media that they do to help you get recruited. You will have to take college recruiting into your own hands if you want to earn a scholarship.

It also brings up an important question- what do you bring to an athletic program? Broadus, while young and inexperienced, is a 6’2” 185lb sophomore with great upside. Combs, while undersized, looks like a good athlete; and, both of them have very rich fathers who can support the football program with donations. It is obvious what these two bring to the table, so you have to ask yourself: how can I show a coach what I can bring to the program? The answer is put together a great highlight film and resume, reach out to coaches, go to camps to display your skills, and continue to develop relationships with those coaches!

Need help figuring out what aspects of yourself you should market to college coaches? Ask us in the comment section below, or connect with us on Facebook, Twitter, or Google+!