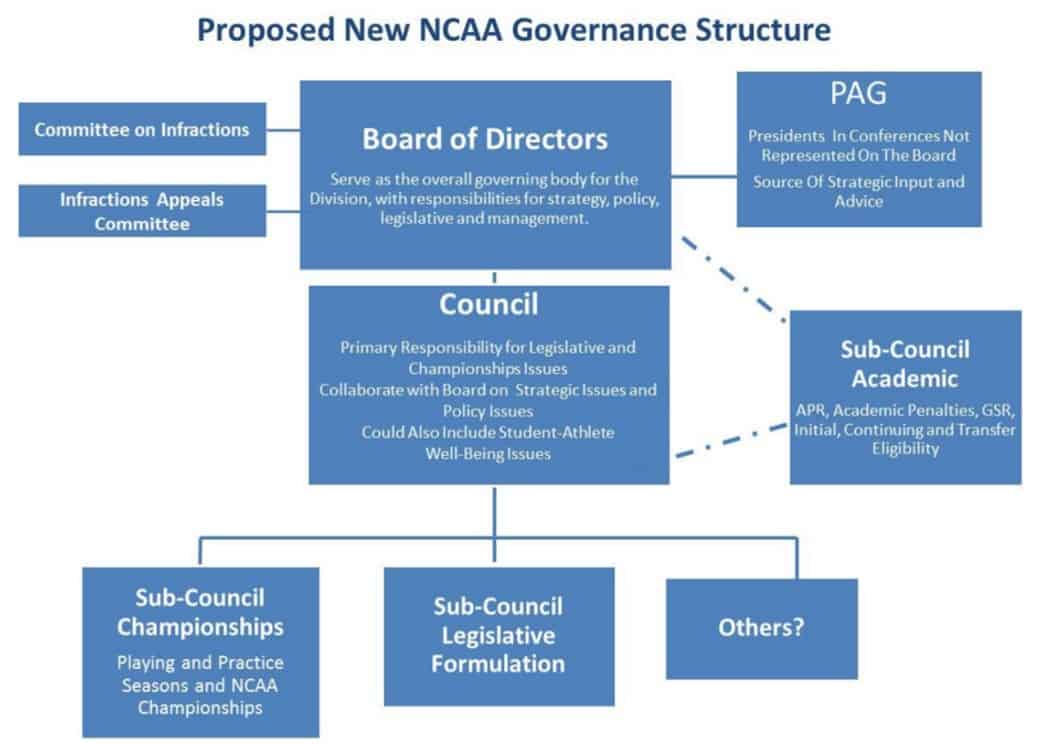 After months of speculation, it appears the issue of NCAA governance is moving rapidly toward a conclusion. What started as threats by commissioners of BCS conferences to further subdivide Division I if not exit the NCAA entirely is now a set of 14 PowerPoint slides that propose how Division I will be run. Brad Wolverton of the Chronicle of Higher Education and Dennis Dodd of CBS Sports both reported on the broad strokes of the proposal. But the details include clues as to how the leadership of Division I views college athletics as well as hints about just how successful this reform effort will be.

The most notable thing about this document is the fact that it exists at all. The PowerPoint as well as a letter from Wake Forest University president Nathan Hatch, chair of the Division I Board of Directors, state these materials are intended to guide discussion at the Division I Governance Dialogue later this week. If so, then discussion has already been guided very specifically to one conclusion. The governance dialogue sessions will not be an open-ended conversation. Rather they will be about debating the merits of a specific idea formulated by the existing Division I leadership.

Given that no fully formed alternative has been proposed by anyone, that may be for the best. But participants should be aware that they are not in a brainstorming session. They are in a legislative debate, which higher stakes for some institutions than any previous Convention.

The document breaks down into four major parts. The first outlines the governing principles which should drive Division I governance going forward. The second explains how a redesigned Board of Directors might function. The third establishes a new system of councils and committees for the more day-to-day work of governing Division I. And finally the document ends with an overhaul of the Division I legislative process.

Most of the governing principles will look familiar to anyone who has seen the NCAA principles, Division I membership philosophy, or new Division I commitments. But two details stand out about that will be interesting going forward.

The first is that amateurism is not included in any discussion of the core values. Instead, the focus is on the “collegiate model”. The presentation defines the collegiate model as one which:

[M]elds athletics opportunities with a holistic educational experience, enabling our student-athletes to be successful in the classroom, within their sport, in their community and post-graduation.

Perhaps this is all PR spin and the document is just avoiding the term “amateurism” since the popular connotation of the term has changed in recent years. And the principles for the NCAA and Division I commitments still expressly mention amateurism. Regardless it still would be significant if this definition of the collegiate model was enshrined in NCAA legislation since it does not preclude many forms of professionalization advocated by NCAA critics. An avocation is not, by definition, amateur. People profit from their hobby or passion projects all the time. It simply puts the onus on anyone proposing a form of professionalization to conform to this principle and show how student-athletes would continue to be (or become) students first and foremost.

The other big change is the higher standard for academics mentioned by the the governing principles. This is the current state of the NCAA’s principles regarding academics, starting with the Division I Commitment to Sound Academic Standards:

Standards of the Association governing participation in intercollegiate athletics, including postseason competition, shall be designed to ensure proper emphasis on educational objectives and the opportunity for academic success, including graduation, of student-athletes who choose to participate at a member institution. Intercollegiate athletics programs shall be maintained as an important component of the educational program, and student-athletes shall be an integral part of the student body. Each member institution’s admission and academic standards for student-athletes shall be designed to promote academic progress and graduation and shall be consistent with the standards adopted by the institution for the student body in general.

Here is Bylaw 2.2.1, Overall Educational Experience, from the Principle of Student-Athlete Well Being:

It is the responsibility of each member institution to establish and maintain an environment in which a student-athlete’s activities are conducted as an integral part of the student-athlete’s educational experience.

And here is Bylaw 2.12, the Principle Governing Eligibility:

Eligibility requirements shall be designed to assure proper emphasis on educational objectives, to promote competitive equity among institutions and to prevent exploitation of student-athletes.

Contrast that with the governing principles regarding academics in the proposal:

Rewriting the NCAA’s principles on academics will not magically fix the issues with trying to balance major college athletics with higher education. What it will do is define a higher standard for judging the NCAA’s progress in this area. The proposed academic principles call into question even fundamental assumptions like the primacy of graduation rates, the lack of rules regarding clustering, initial eligibility standards, and playing and practice season limits. Division I may unwittingly be raising the bar when it has not definitively cleared the current height.

The Division I Board of Directors will see the least change of anything mentioned in the proposal. Membership will still be based on the same formula: permanent seats for every FBS conference with the other two subdivisions sharing seven seats. The board will change from 18 members to 17 since the Western Athletic Conference is no longer an FBS conference and thus no longer entitled to a permanent seat.

The other big change to the Board of Directors will be the definition of when the board can act on its own. The tone of the proposal suggests this will be more limited than it currently is, especially compared to the post-Presidential Retreat era. The proposed structure seems designed to avoid another Board of Directors takeover of the entire legislative process. But when the board acts, it may have even more authority than it currently does, since some actions may no longer be subject to the override process.

The composition of the council will be roughly similar to the composition of the current Legislative and Leadership Councils. It will be mostly athletics professionals with potentially some presidents. Every conference will be represented, as well as up to five additional at-large seats, which could swing the balance of power depending on voting weight (still to be determined) and who occupies the at-large seats.

Of the cabinets, two will live on more or less as they are. The Championships/Sports Management Cabinet would become the Championships Sub-Council and the Academic cabinet would become the Academic Sub-Council. The Academic Sub-Council would be a little different, potentially absorbing the Committee on Academic Performance and reporting to the Board of Directors as well as the council. All the other cabinets would initially be absorbed into a third sub-council called Legislative Formation, although the council would be empowered to created additional groups which could replicate the existing cabinet structure.

Not addressed by the document are the fates of all the Division I committees like the Committee on Student-Athlete Reinstatement or Subcommittee for Legislative Relief. They may not be affected, since the document is focused on legislative authority rather than administrative decision-making. On the other hand, all of those committees may be wiped out, with the new council tasked with creating a new set of administrative committees tailored to the new legislative principles and processes.

If this document was produced in Spring 2013 instead of late Fall 2013, it probably would have ended with the changes to the council. At that time, most of the complaints about NCAA governance involved the powers of the presidents vs. those of the practitioners, which are largely addressed by the rest of the changes. But over the summer, governance became a haves vs. have-nots issue, with the power conferences demanding autonomy on at least some issues under the threat of a breakaway or new division.

That concern lead to the part of the document that has gotten the most press. The proposed plan continues the “Big Tent” model of Division I. But it also gives autonomy to the five power conferences on certain issues. The bar for this autonomous group to pass legislation would be higher, say four out of the five conferences agreeing on an action. And while they would have autonomy, the group would still need to consult the rest of Division I.

That autonomy would be limited to certain areas. Those areas include some standard complaints over the last two years, including raising the maximum value of an athletic scholarship and providing increased incidental benefits to athletes. It also includes some issues that have not been raised previously, like creating athletic dead periods similar to those in Division II so athletes can explore other opportunities.

But some of the topics mentioned by commissioners and athletic directors since the summer are not included in the topics earmarked for autonomy. Academic standards and team scholarship limits are listed under examples for shared governance. Recruiting restrictions and length-of-season/maximum competition rules are not mentioned at all. On the other hand, one bullet in the “Proposed Areas for Autonomy” is this nebulous concept:

The combination of not meeting all the demands of the power conferences plus the possibility of such open-ended definitions of what those conferences can legislate on their own are the seeds for revisiting the debate over who should be in Division I sooner rather than later.

If this proposal is adopted largely as is, it will represent a major victory for the power conferences, who at the very least will be able to take care of some low-hanging fruit that not even the Board of Directors could push through themselves over the last two years. At the same time, the poorest institutions in Division I will not seem themselves legislated out of the top level immediately. Like most recent history in college athletics, the ones who make out the worst are Division I’s middle class: the Group of Five FBS conferences and the top basketball leagues. They complete or aspire to compete with the power conferences, but may find themselves prohibited from doing so by differing NCAA rules.

But while the power conferences would be empowered to tinker with college athletics, they would not have enough authority to reimagine or transform the NCAA. They cannot match larger scholarships and relaxed agent rules with higher academic standards or general amateurism unless the rest of Division I agrees. Throw in just enough fuel that this was the intent of the governance reform and one can see how we will be right back here having the same debate in a few years.