The story of Robert Nkemdiche’s recruitment began with his commitment to Clemson and has now centered around the number of friends and teammates Clemson has offered scholarships to in order to secure and keep Nkemdiche’s commitment. It has lead to broader questions about whether package deals should be allowed by the NCAA and whether coaches should take recruits who ask for scholarships for the friends or jobs for their parents and coaches. 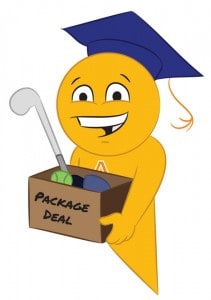 As coverage of recruiting becomes more mainstream, the thought is that either more package deals that are already happening will come to light or the attention focused on big-time prospects will cause more to try and grab a share of the limelight and help a friend at the same time.

There’s little to fear about package deals becoming commonplace throughout college recruiting because of NCAA scholarship limits. Package deals will almost always be limited to football and men’s or women’s basketball, and even then to only the very top Division I recruits (and the other prospects in the package).

There can never be significant package deals in equivalency sports because of how coaches in those sports approach their scholarship limits. Rather than handing out scholarships in full grant-in-aid chunks, equivalency coaches are more likely to think of the dollars being given. Plus, if the request is for a large scholarship for a friend, the trade off for a coach might include losing multiple prospects to land an elite athlete.

In other headcount sports that offer only full scholarships, there are too few scholarships to give one to an athlete the coach might not otherwise recruit. While football and basketball can more than fill a full roster of starters and backups with scholarship players, women’s volleyball, women’s gymnastics, and tennis cannot.

In most sports, any package deal is more likely to include athletes who were already both considering a school who decide to go together rather than one athlete asking a coach to give a friend a scholarship even though the coach was not recruiting the other athlete. Most of the time recruits pick a school together, a college coach has little or no involvement in the decision-making process.

The Other, More Threatening, Package Deal

The other type of package deal, one which the NCAA is keeping a very close eye on, is schools hiring a parent or coach to get a commitment from the athlete. In men’s basketball, the NCAA tried to set limits on this practice by restricting these hires to coaching positions only. The rule operates on the same theory that prevents package deals in many sports. A head men’s basketball coach is limited to three assistant positions, and using one to get one athlete is too big of a trade off. Expect a similar rule to come to football soon, then possibly spread to other sports.

Package deals are not something most recruits will have to worry about. Only a tiny fraction will ever be involved in this kind of recruiting and only slightly more will ever be impacted by a coach having to give a scholarship at the request of another athlete. Even as recruiting becomes part of the mainstream, package deals will stay on the fringe.

Do you have any questions about scholarships or the recruiting process?  Just ask us in the comment section below, or connect with us on Facebook, Twitter, and Google+!