The tight end position can be of extreme value or limited importance, depending on the type of offense your coach has implemented. Professional teams such as the New England Patriots and the Peyton Manning- era Indianapolis colts made the tight end position vital to their success as Super Bowl champions. 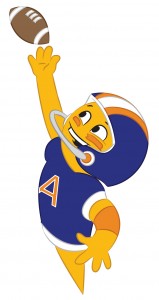 Following in the NFL’s footsteps, many college teams are now moving in the direction of recruiting and using versatile tight ends. The University of Florida recruited Aaron Hernandez, whose talents helped win a national championship and first team All-American honors. His versatility got him drafted by the New England Patriots, helping them earn a 2012 Super Bowl berth. Similarly, the University of Miami has built a great reputation of developing strong, mobile tight ends; NFL All-Pros Jeremy Shockey, Kellen Winslow, and Greg Olsen all hail from the “U.”

Playing tight end requires an athlete to run, block, and catch well. Today’s tight end needs to accomplish the same tasks the position demanded twenty years ago, but be far more skilled in each category. Here are some tips to help you become a better tight end and football recruit.

The tight end is one of the few areas of the football field where true mismatches can be made. Tight ends are usually taller and faster than most linebackers and more powerful than most defensive backs. Accordingly, tight ends should have the ability to out maneuver and outrun most linebackers ,while being able to overpower most defensive backs for the ball or position on the field. These situations are called designed mismatches.

One of your responsibilities is to understand where your mismatches lie on the field and exploit them. This knowledge comes from working with your coaches, quarterbacks, and watching film of your opponent. Understanding your opponent’s situational defenses and where they consistently leave holes, paired with your ability to recognize possible mismatches and using those mismatches to your advantage, creates value for football recruits.

The tight end position combines the skills and size of an offensive lineman with the skills and speed of a wide receiver. It’s because of this dual need that good tight ends are hard to come by, and are valuable. As a potential recruit, it’s your job to understand the importance of each position and pull double-duty to become equally talented in both areas. The offensive scheme you play under might favor blocking versus receiving or vice versa, but it’s imperative that you be well-rounded if you desire to be recruited by multiple schools with multiple offensive looks.

Becoming skilled in two separate positions and having to somehow coexist can be challenging. Finding success means dedicating yourself to maintaining the right diet, workout, and exercise routines to bulk up to the proper size, while maintaining the necessary speed and agility. College tight ends range in size depending on the level played; most weigh in around or over the 220 pound mark.

Traditional tight ends have been very bulky, but today’s game calls for leaner bodied athletes. This stature takes time and effort to develop; it takes the right eating habits and, more importantly, the right workout. Building the right body requires full-body workouts while still incorporating traditional isolations such as the bench press and squats. Newly popular CrossFit exercises are great full body workouts, and other routines can be built on the foundation of circuit drills. Both exercise regimens force the heart rate to stay up, therefore burning more calories and building lean muscle.

All skills aside, quality recruits need to put adequate time into building chemistry with their teammates, especially their quarterback. Note the relationship Dallas Clark built with Peyton Manning or the sparks that flew this year between Rob Gronkowski and Tom Brady; these duos were built on relationships, practice, and chemistry. It’s really hard to impress a coach on film if you are never on the same page with your quarterback or your other offensive teammates. Chemistry is built off the field just as much as it is on, become close friends with those that play around you and notice the difference it makes on the gridiron.

Do you want to know how to get recruited to play college football? Ask us in the comments section below or find us on Facebook, Twitter or Google+!