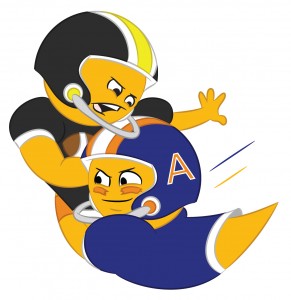 Dominant defenses are usually led by dominant defensive lines. Let’s reflect on this year’s Super Bowl-winning New York Giants and their tenacious pass rush led by Justin Tuck. It was Tuck and his team of “Giants” that struck fear into the normally ice-cold Tom Brady, causing a safety on the first play of the Patriots’ first drive. You know what they say: offense wins games, but defense wins championships! This is largely in part to the play of the defensive line, both with stopping the run and disrupting the pass.

Understand the Size Needed For Success

Defensive linemen are very explosive athletes. You aren’t expected to be the fastest guy on the team. But when you factor in size, strength, and speed, defensive linemen are some of the best all-around athletes on the field. Technique is the key to getting leverage; staying low and using leverage to get under the pads of often- larger offensive line players show coaches you are developed as a player. Being able to fire off the ball quickly is a mixture of anticipation and power. Although anticipation is somewhat natural, it can be practiced and learned; snap counts can be studied through watching film.

An athlete’s power is built in the weight room, and as a defensive lineman, the weight room needs to be a major part of your training. You must work hard to keep a well-balanced muscular body. This means proportionate upper- and lower- body strength. Focusing too much on one aspect of your body will hinder your development as an all- around athlete.

Make sure you are working with your coach to create a position- specific workout regimen. Many times, this is an area where the coaches fall short. Don’t be afraid to seek out the advice of strength and conditioning experts.

It is very easy to watch a defensive lineman on film and see if he understands his position and how to play it. An unseasoned defensive end will get sucked inside early, lose containment, and forget to stay home often. Just the same, inexperienced defensive tackles can get washed down the line or cut very easily. No matter the type of defensive scheme, a defensive lineman needs to be able to either hold his ground or penetrate the backfield.

The hardest aspect of being a “big” guy is maintaining the speed of a smaller more agile athlete. Elite defensive linemen are supposed to be bigger than linebackers but have similar speed; this is especially true for defensive ends. More recently, with the up-tempo style of college programs, defensive linemen are expected to have good endurance as well. The best way to gain speed and endurance is to run sprints and distance throughout summer workouts.

Do you have questions about playing college football? Leave them in the comments section below or connect with us on Facebook, Twitter or Google+!