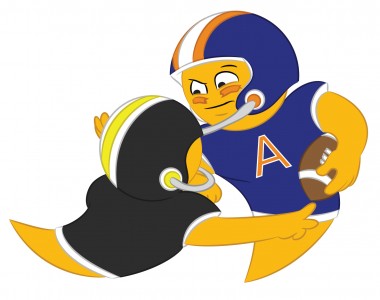 Traditionally, college football coaches recruited the prototypical pro-style every down running back as a featured weapon of their offense. With the advent of the spread offense in college football schemes, recruiting for smaller- shiftier backs has become more popular. Ideally, your ability to be recruited as a running back is going to come down to which scheme better fits your style of play and body type.

It isn’t likely a coach such as Alabama’s Nick Saban is going to recruit a spread style running back for his pro-style offense. Alabama’s history of running back- such as, Mark Ingram, Trent Richardson, Eddie Lacy, and the current roster of 6 feet-plus, 200 pound-plus running backs-supports this theory. On the other hand, look at the history of Ohio State’s Urban Meyer or Oregon’s Chip Kelly who both are very big on recruiting smaller-frame fast running backs. All this vital information is available via the rosters of the teams you’re interested in playing for; you just have to do the research and find out if that team’s the right fit for you.

Film study can be a great benefit for a running back. You should watch and evaluate film on both yourself and your opponents. When watching film of yourself, look for missed opportunities on holes, cuts, and blocks. An error that young running backs often make is dancing or running east and west instead of north and south; the end zones are never located on the sidelines. As a blocker, you are essentially the sixth or seventh lineman responsible for protecting your quarterback or becoming a chip and release guy. Film study will help you realize whether you’re effective at this task and what other areas you need to improve upon. Watching film of your opponent will allow you to learn tendencies of the opposing defense. Does the linebacker tell the blitz early, does a certain lineman not stay home on the backside cut, are their corners weak as open field tacklers, etc.?

Good running backs get through assigned holes; great running backs can anticipate holes opening and have the vision to create holes that didn’t exist. Good running backs run to opponents, while great running backs run through and away from opponents, Sometimes greatness comes as a result of instinct while others find it through hard work and dedication. No matter your path, as a potential college football prospect, greatness should be a goal. Work to build upon skills such as high knees, low center of gravity, speed bursts, quick feet, and agility. Practice your hand-eye coordination; a running back that can catch the ball out of the back field is a precious and valuable commodity.

A running back must possess speed, agility, and a level of illusiveness to be considered as a serious college recruit. Your speed depends largely on the size running back your genetics allow you to be; if you stand 6 feet  tall and weigh 220 pounds, then you aren’t likely to be as fast or agile as a 5 feet 10 inch 180 pound back. This doesn’t excuse working hard toward becoming as fast your body will allow. Consecutive sprints are going to allow you to build both speed and endurance. Run 400s, 200s, 100s, and 40s throughout your offseason training. Run 20s and 10s wearing an array of weight vests, ankle weights or parachutes or pulling weighted sleds. Practice explosion exercises such as box jumps and complete drills such as agility ladders that allow you to train quick feet.

Do you have questions about getting recruited to play college football? Check out this football scholarship page here or ask your questions in the comments section below. You can also find us on Facebook, Twitter, or Google+!